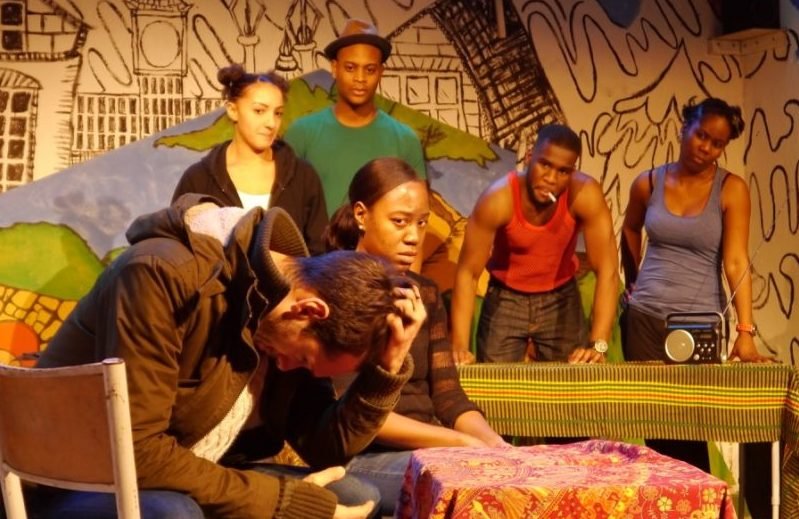 Carol and her two daughters run a takeaway shop in Brixton. Set in the midst of anti-gentrification riots, Takeaway explores the lives of the family and the differences between the first and second generation. A comedy at its core, Takeaway is play full of fun and great music, whilst also taking a look at some of the dynamics of Black British families.

Takeaway was first performed as a 20 minute piece at Theatre 503. It won a new writing competition to be performed alongside another 20 minute piece of new writing. The company was then formed, made up of talented actors and comedians. The performance was very well received and so the full length piece was developed and debuted for one night only at the Hackney Attic on the 6th January.

What the People Say

“Takeaway is at its core, a comedy, it feels like a sit-com. The tightly-woven cast bounce off each other with familiar ease.”

“Takeaway is a pleasure to watch- one can’t help but think that Powell captures Brixton life in the way Zadie Smith captured West-London life so well in White Teeth. Such comparisons can be brash- Takeaway is no Smith-carbon-copy: its originality is startling. I’d love to see a fully fleshed-out version, so any theatres reading- don’t book whichever boring adaptation you were thinking of booking- give Powell a ring. These guys are hot prospects.”

"Takeaway is a theatrical gem, as well as a social outcry, simple and straightforward.......

I was immersed in a beautifully uproarious crowd that cheered and roared at the sound of Jamaican dancehall music coming from the stage. I loved the easy-going but thought-provoking take on such an urgent matter, and I enjoyed the close-knit community atmosphere and diversity of the audience...

I really hope to see Takeaway on stage again soon, in a more suitable venue and with a more generous budget."

"The tightly woven cast bounce brilliantly with each other from one scene to another, and Powell manages to capture Brixton life in a humorous and detailed way, whilst capturing how these intergenerational relationships within one family can both help and hinder them."